Rethinking R&D to Prime it for Future Success

Much of the world has this romantic notion that drug discovery involves a small number of hero scientists toiling away in a lab until – Eureka! – the breakthrough moment happens, and a molecule is born that becomes a new medicine. The reality is quite different though.

That’s why if you were to ask me what sport drug development most closely resembles, I’d say a long-distance relay race because making a new medicine takes a long time, a lot of hard work and a large team of bright minds passing the proverbial baton back and forth more often than you could possibly imagine. But perseverant bright minds alone don’t automatically lead to cohesive teams and they certainly don’t guarantee success. This is especially true in drug development where failures are much more common than successes.

I hate to say it but many of the new molecules our industry works on fail for lack of adequate coordination within the R&D process as much as they fail in the clinic. That’s why even though organizational structure and methods of collaboration are definitely not the sexy sides of science, I’ve found that well-structured and smartly integrated teams are an absolutely vital part of developing new medicines and establishing pipelines that ensure future success.

I hate to say it but many of the new molecules our industry works on fail for lack of adequate coordination within the R&D process as much as they fail in the clinic.

Simply put, the structure of research teams matters immensely, and much more so than many people realize. Knowing this, a couple of years ago, my colleague Kevin Fitzgerald, our Chief Scientific Officer and I set out to rethink the structure of R&D at Alnylam to ensure that it functions as seamlessly as possible, and rather than holding us back as organizational structures so often do, that it is a catalyst for sustained innovation.

The result is what we call “ReDev” – the combination of Kevin’s research team, and my early development team, and believe it or not, it’s pretty a-typical for our industry. Traditionally, research discovers new molecules and lobs them over the fence to early development to predict how those molecules will behave in people.  By the time the latter has done so, the former has moved on to the next molecule and in the “hand-off” so much gets lost. Instead, at Alnylam, members of ReDev have been given the mandate to work freely as one integrated team, iterating as they see fit for as long as they need to, and following hunches to see where they lead. This has been incredibly liberating for our people and it is paying huge dividends! 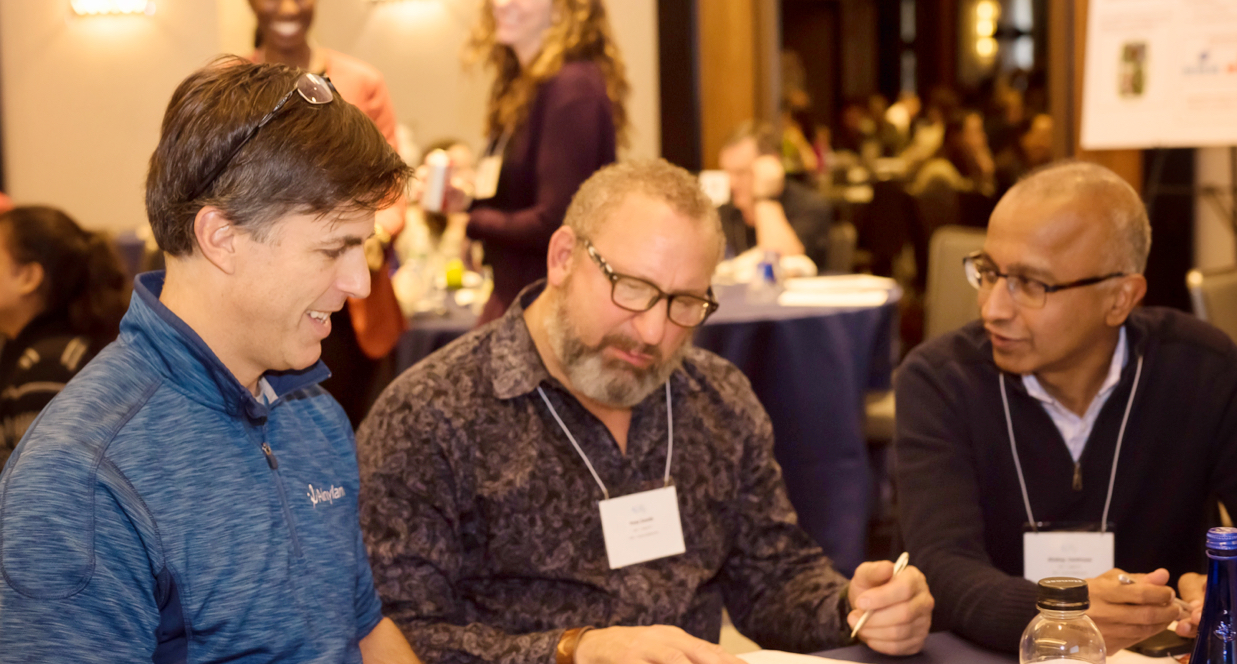 ReDev’s seamless integration between the research and early development groups coupled with our strategic partnerships and investments in technology is literally powering our future. It’s leading to discoveries and process innovations that are enabling us to pursue new strategic therapeutic areas and file two to three new INDs (Investigational New Drug applications) per year – which is an astounding rate!

In fact, one of our most exciting programs to-date was borne out of close collaboration as part of a ReDev “skunk works” project. Of their own volition, a cross-functional group of researchers realized that they could deliver siRNA into the spine of rodents and then achieve protein knockdown in the spinal cord and brain. That was an unprecedented discovery that became the foundation of what is now our central nervous system (CNS) drug development program and a key pillar of our multi-million dollar collaboration with Regeneron.

For R&D at Alnylam, ReDev means that nothing is holding our people back from the kind of innovation and problem solving that’s needed for us to have the maximum impact for patients.

On the technology side, a ReDev team comprised of members of our Drug Metabolism and Pharmacokinetics group and our Clinical Pharmacology (DMPK) group is now leveraging computer modeling and an internally developed program that allows us to simulate how molecules might behave in people. They’re using this simulation to predict the disposition and metabolism of molecules in humans and determine how our investigational therapeutics should ultimately be dosed in humans. This approach is accelerating the pace at which we can get new molecules into the clinic. Greater velocity into the clinic means that potentially life-changing new treatment options can get to patients sooner, assuming positive clinical results.

So, what does all of this mean for our future? For Alnylam, it means that we are using all the tools at our disposal to improve the underlying technologies of our RNAi therapeutics platform to target new diseases. For R&D at Alnylam, ReDev means that nothing is holding our people back from the kind of innovation and problem solving that are needed for us to have the maximum impact for patients.

In my opinion, our approach to drug discovery and development at Alnylam is far more exciting than even the most romanticized idea of a brilliant hero scientist laboring away in relative isolation. What we’re now doing here at Alnylam is exhilarating and in stark contrast to the way things were done before. I am learning every day and I'm engaged with people who are really all about striving to make life better for people living with devastating diseases. You’ve got to pinch yourself sometimes and be grateful for the opportunity to be engaged in this mission at this point in history, because the approved RNAi therapeutics we are making are changing and will continue to change the way that medicine treats disease.